I have turned off all power savings options, added the BFlagToggle line to the registry, changed the side scaling and disabled Interrupt Moderation.

None of these changes have stopped the disconnects from happening. I'm considering purchasing a cheap PCI-e network adapter just so I can work without the disconnect issues. I had exactly same: My network adapter reported 10 always on "cold boot". I cannot believe how many threads there are with people having connection problems with the V ethernet.

I am at my wits end with this crap. What's even more frustrating is it works perfectly out of the box with Mac OSX I'm going to try and install a hacked Atheros driver for my Mac OSX installation because I feel I will have less trouble if I just avoid the intel chip entirely right now. Its going to be a sad day when I have less trouble installing a homebrew Atheros driver for my other ethernet port on my Hackintosh than using the official drivers from Intel on windows. I'm seeing an intel r 82579v based network controller oem with one of our computers that has an Intel LM adapter. We were having an issue with one of our software packages generating errors and the vendor suggested it was related to a network adapter timing out or going to sleep.

I investigated that message and decided to turn off auto negotiation on the adapter and set the link speed to Mbps Full Duplex. Our application issues disappeared and we are not currently experiencing problems.

When I review the event log I still see these warnings being logged. I have confirmed that the adapter is fixed at Mbps Full Duplex. My guess is that the process that tries to auto negotiate and also logs the events is still active but that it is not actually having an effect on the actual adapter.

Can you confirm if this is the case? I would very much like to eliminate the warnings for this issue from the event log and I'm a bit confused as intel r 82579v based network controller oem why the event log makes it appear that auto negotiation is still happening even though it is turned off on the adapter. I just tried the latest However I was using I went back to I guess the old saying goes, if it ain't broke don't fix it. What is wrong with this?

I already upgraded the NVM and am using the latest driver. Why can't anyone answer here? Intel REP please answer.

Support from Intel and Asus for this issue is very disappointing. I tried all suggestions mentioned here and nothing works. Intel admits that the device has issues, but doesn't realy solves it. Also the Intel NVM utility does not solve the problem. Asus doesn't even post the latest driver for this device on their site.

They still have the I gess they gave it up. Some weeks ago they send my issue to their experts in Taiwan, but I didn't get a solution yet. I have an Asus P8ZI Deluxe and get a code 10 error after a cold boot, but after a restart the device works fine.

So I tried to use the sleep mode instead, because then the device does not do a cold boot. That works fine, but then a different issue appears: the device awakes the PC from sleep for no reason. It seems that the WOL implementation of the device is totally messed-up.

Deleting al that feateres doesn't help either. The only solution is to completely disable the device solder it out maybe and put a LAN card in your PCI slot without an Intel device of courselike many other users did already. 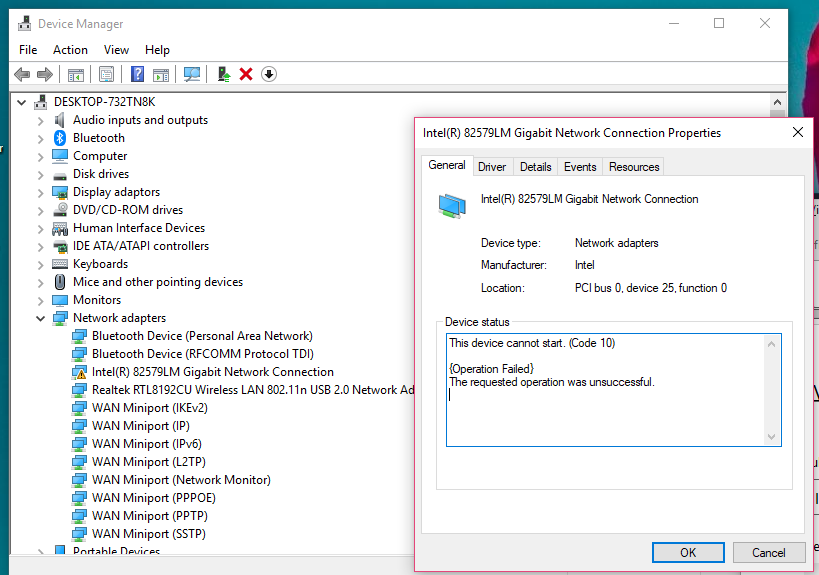 Please everyone: avoid using any motherboards with an device!! How can Intel Support Community improve to better meet your needs?